Lupus in Tabula (Rogeri) or The Sicilian Cradle of Civilizations

Just after the Second Crusade, the Muslim cartographer born in Ceuta and named Muhammad al-Idrisi (1099–1165/66), after traveling extensively, set up residence on the island of Sicily in the middle of the Mediterranean Sea, under the auspices of Roger II, King of Sicily.
in 1154 Al-Idrisi draw for King of Sicily a map that changed the vision of word for the centuries to come.
Have you uncovered the secret? Perhaps, this rotated view might be more familiar. 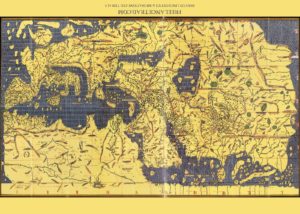 Click on the map to discover our Linguistic and Cultural Mediation Service.
Early cartographers, particularly in the Arab world, placed north at the bottom of their charts and south at the top. Indeed, Muslim mapmakers, considered Mecca center north above the Arabian Peninsula, which was in the center. Moreover, there are “no monsters, mathematical or religious signs” on his maps to indicate the unknown world (remember the latin phrase used on maps hic sunt leones), thus demonstrating a more scientific and modern approach to cartography in the Sicilian Cradle of Mediterranean Civilizations.
To draw his map, al-Idrisi interviewed experienced travelers individually and in groups on their knowledge of the world. Written in Arabic and Latin accompanied by the above maps Roger’s Book (Kitab Rujar), already presented the world as a sphere.
For these reasons, The Tabula Rogeriana drawn by Al-Idrisi in 1154 for the King of Sicily who commissioned this works was the most accurate map of the known inhabited world for three hundred years, or even more.
“The relative position of the lakes which form the Nile, as delineated in his work” says S.P. Scott in 1904 “does not differ greatly from that established by Baker and Stanley more than seven hundred years afterwards, and their number is the same”.